All Google Updates on a Page 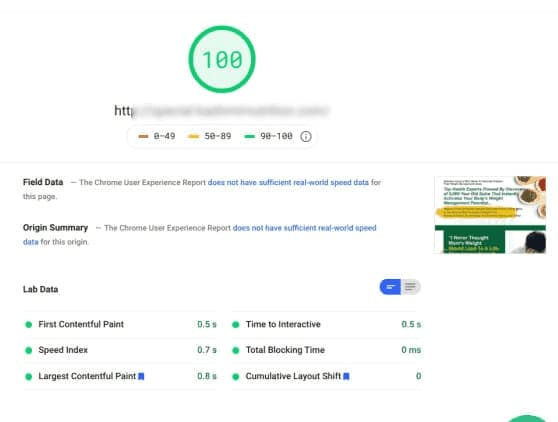 Content above-the-fold, resources outside the visitor's screen delayed. Comply with the Google Core Web Vitals metric, a ranking signal from 2021. 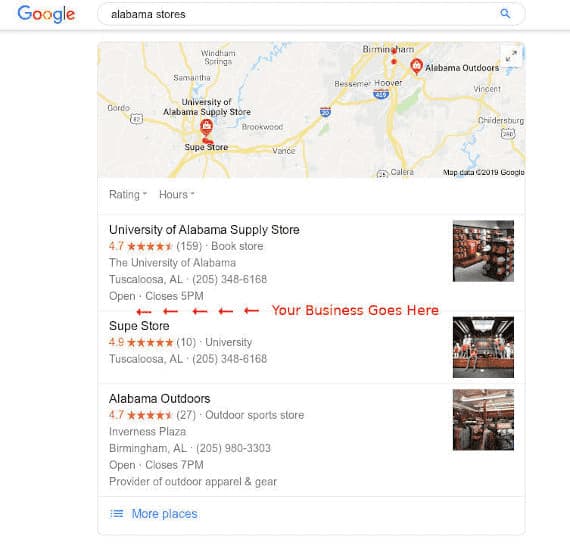 Push your business to the Top 3 Google Maps listings that show up on all devices. 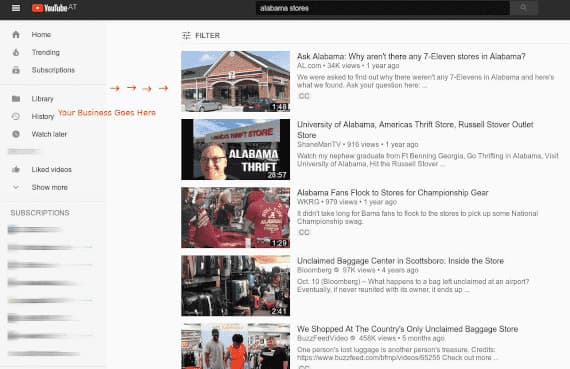 Don't wait for your site to rank. Rank your videos in the YouTube top results and advertise to 1,3 billion users.

The first core 'confirmed' update in 2020 that took two weeks to roll out and as the community reports, it managed to favor the big guys again. It also seems that the AI has responded badly to a seasonal flue turned into a fake COVID-19 pandemic, and the search results are off. Nice job Google! 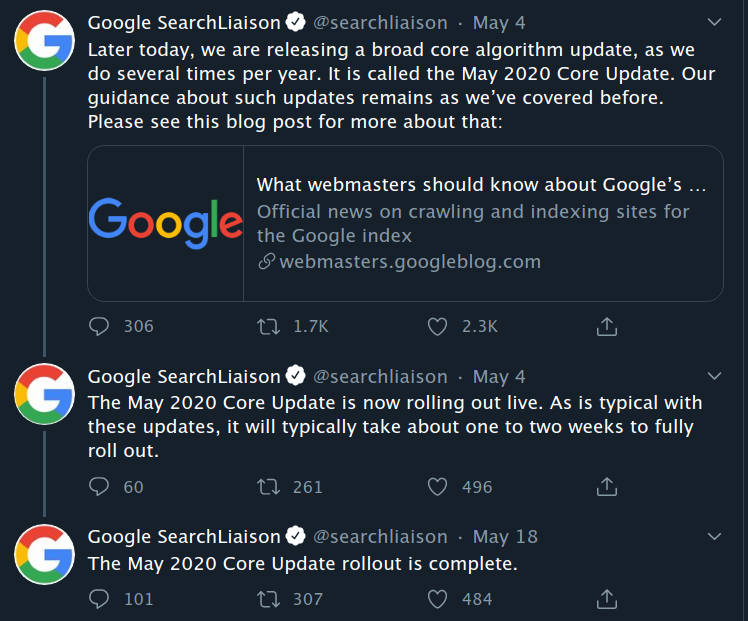 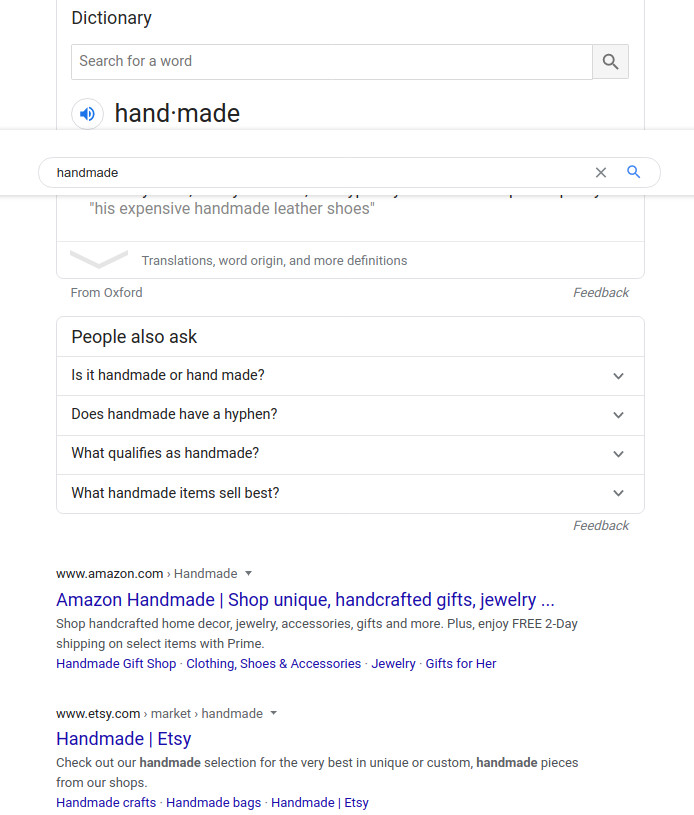 First time Google announces a scheduled Core Update. This was the second Core Update of the year (see below). It affected a wider group of domains (Low-quality Content and News websites) than usual Core Updates do. Trusted websites got a boost. Core updates do not focus on a search queries or website characteristics. 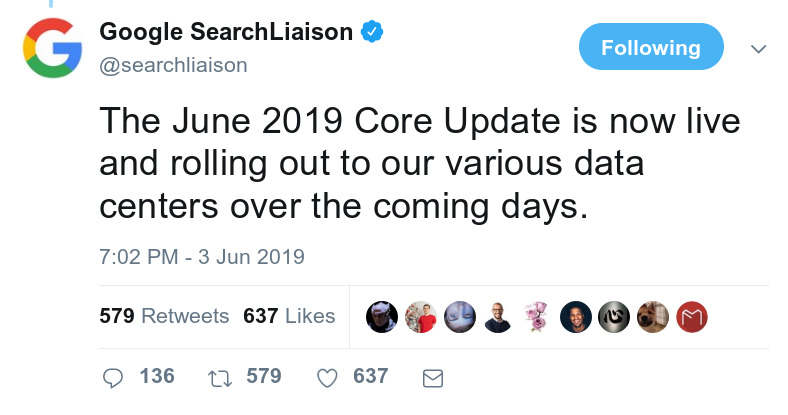 Google confirmed the release of a broad core search ranking algorithm update. It was one of the several core ranking updates Google releases per year and rarely confirms. Roger Montti at searchenginejournal.com said that this update is one of the biggest updates in years. Note that Google says there is no fix for impacted websites. Broad core updates don't target any niche or any particular signals but are generic fixes.

The broad Google Algorithm Update supposedly affected YMYL (Your Money or Your Life) pages, niches like diet, nutrition and medical device niches. Also, large changes with multiple locations across the country dropped in rankings in favor of smaller, locally based businesses. Some webmasters saw their traffic dropping up to 20%. With the core Google Updates, you will probably notice the change in your rankings in ten to twenty days. Though, other individuals have data to support that it was a quality update, plus a push for keyword relevancy and social signals. Here is the update confirmation coming from Google: 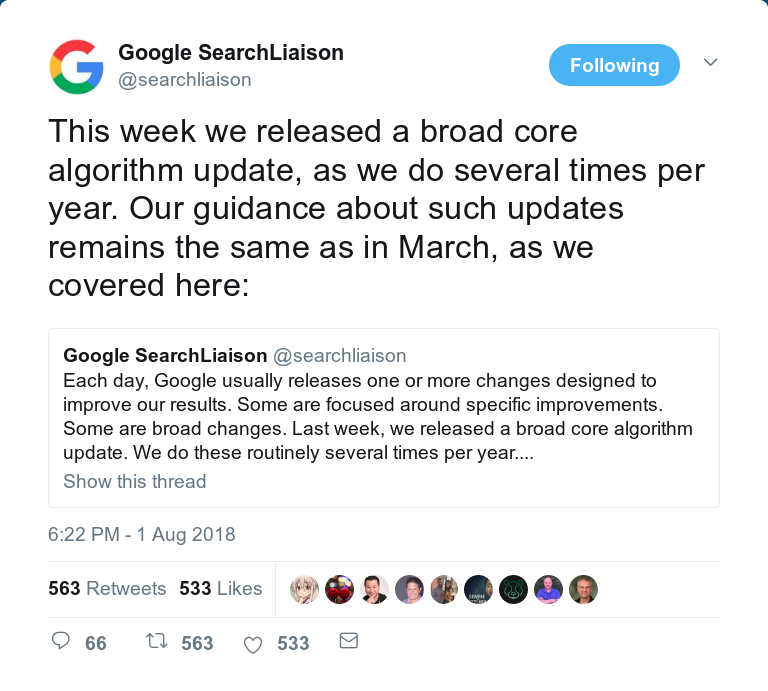 As we understand from the confirmation, the scope is to improve how Google matches relevant results to search queries. Google says it is not about poor content quality. Who believes them right? Danny Sullivan (Google) declined to comment on what to fix. A drop in rankings does not mean there is something to fix in the site that lost rankings. 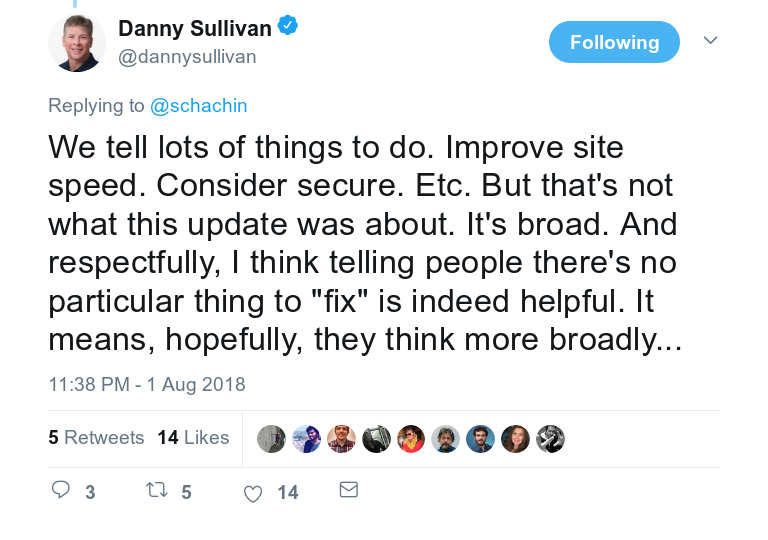 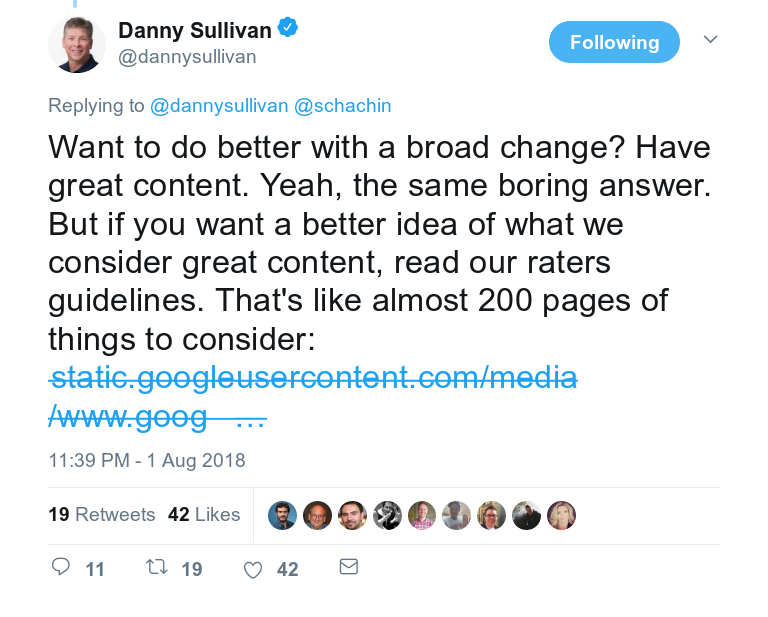 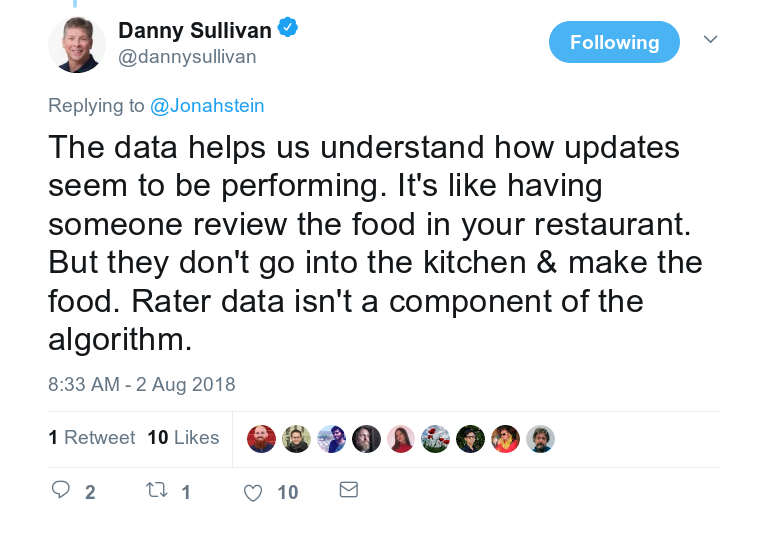 In 2017, Google sent 45 million messages to website owners via Search Console notifying them about issues identified with their websites. Google refers to the bad actors as abusers and spammers who violate the webmaster guidelines trying to manipulate search rankings and profit from them. Several popular CMSs are the target of spammers who abuse their provisions for user-generated content, such as posting spam content in comment sections or forums. Another concern is the manipulation of links, which is one of the foundation ranking signals for Search. Google took action in 2017 on nearly 90,000 user reports of search spam.

There were indications that suggested a silent Google algorithm update. Webmasters across the world and monitoring tools reported shifts in traffic and positions. It seems that Google runs an update per month.

Pages were utterly dropping out of the SERPs and then come back every 6-12 hours then show back up in the same spot like nothing happened. Fluctuations last for a whole week in specific locations. Users have watched results switching between about three different sets of results. It looks like the update lasted for a week, and now it seems OK. Like after the September drop, big brands (magazines, newspapers) are currently dominating the SERPs for many of the terms users saw their pages drop. Most of those brand pages lack in-depth information and scratch the surface of the topic. Also, these brands are even using quotes from exclusive interviews by just copying the data and without mentioning the source.

Google confirmed that it did a core algorithm update in April and said it is common to run all kinds of changes throughout the year. According to Google, webmasters can do nothing specific to maximize or fix their rankings following an update, other than improving the site quality. With this one, Google said that pages, which previously show loses, would now see a benefit from these core changes. The monitoring tools that showed (below) turbulence in mid-April were right.

Google confirmed the shift from desktop to mobile-first indexing. There will be one single index that they will use for serving search results. Increasingly, they will use the mobile versions of content and leave behind the desktop versions.

Users now receiving the following message:
Mobile-first indexing enabled for http://www.domain.com.
To owner of http://www.domain.com/,
This means that you may see more traffic in your logs from Googlebot Smartphone. You may also see that snippets in Google Search results are now generated from the mobile version of your content.

Confirmed update of Google core ranking algorithm. It was a Broad Core Algorithm Update aiming to provide better search results (some call it The Brackets Update). There was content improvements with no ″quality″ issue as a concern. Google states nothing wrong with sites that lost rankings, 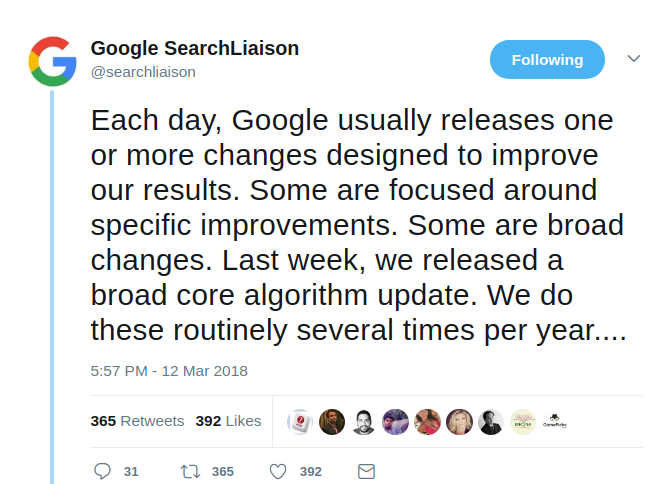 and here is why it is hard to believe the statement: Google says: There’s no ″fix″ to websites that lost rankings. 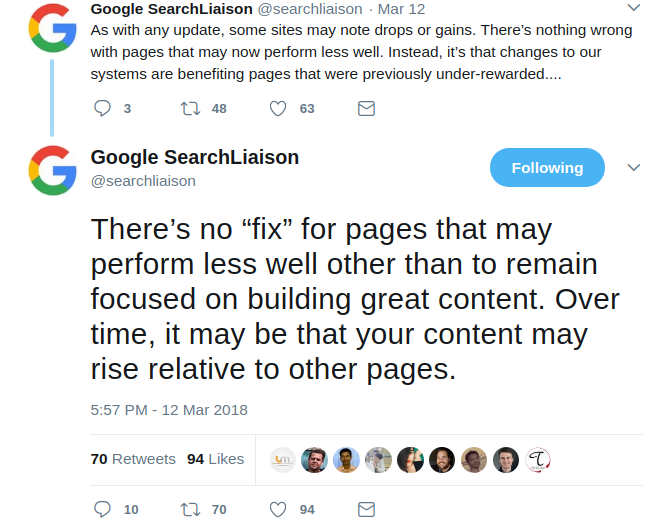 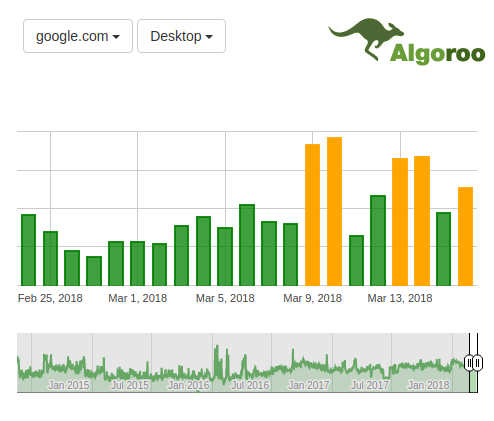 There were fluctuations all over the charts and no precise information about the changes. 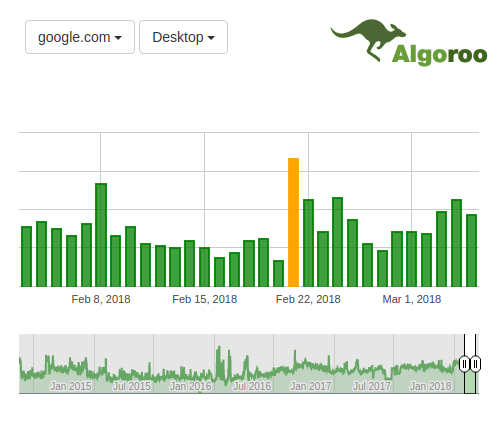 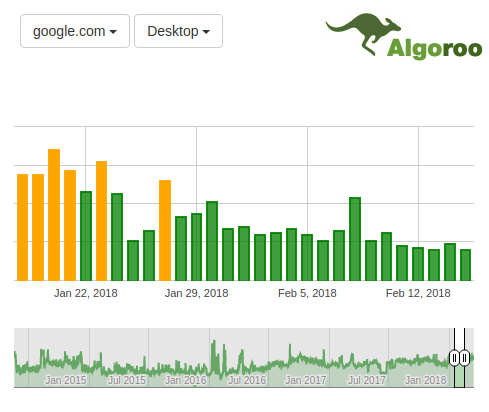 According to Barry Schwarz, there were several changes to the algorithm in December. Around January 5-7 the changes involved keyword permutations, PBNs, and celebrity sites. 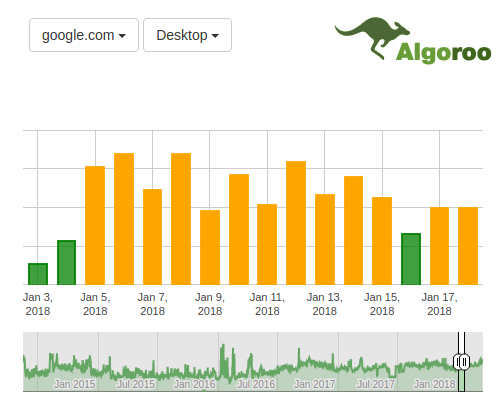 Formerly known as Fred, the Maccabees Update brought several minor changes to the core algorithm between December 12 and 14. The name comes from Barry Schwartz of SERoundtable who named it Maccabees in recognition of Hanukkah. 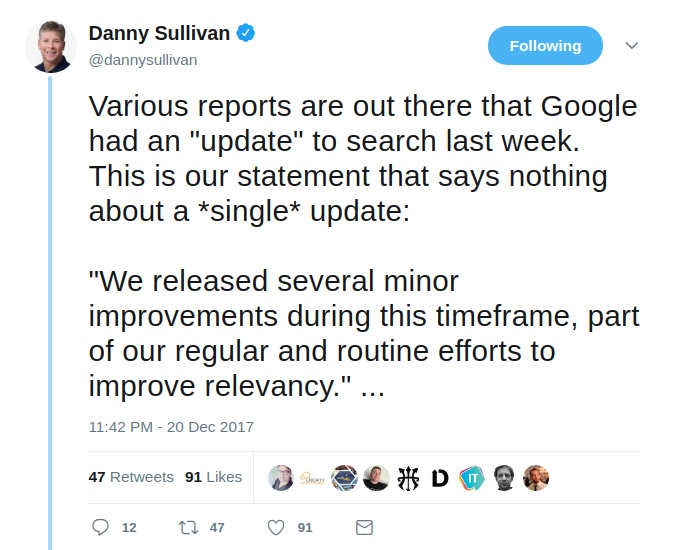 Volatility and fluctuations from this date on and additional occurrences on September 18, 25, and 29, as well as October 4, 8, and 12. The update is still unconfirmed.

It seemed like a significant update that impacted pages ranking in Positions 6-10. The hit was mostly in the Good and Beverage industry.

The update took its name from Gary Illyes (Google). It was a significant algorithm update targeting low-quality content.

The update targeted intrusive interstitials and pop-ups that affect the user experience on mobile devices.

From now on the Penguin algorithm is an integrated part of the core algorithm. Penguin will be evaluating websites and links in real-time. A significant change is that Penguin devalues backlinks, instead of demoting page rankings.

A content-related Quality Update began rolling out around June 1, with additional search ranking volatility on June 8, 21, and 26.

Designed to increase the effect of the ranking signal this second update AKA Mobilegeddon 2, to the first mobile-friendly Update.

Panda is now an integral part of the core Google algorithm and no longer its separate algorithm. Panda does not act in real time.

Google officially introduced RankBrain a machine learning algorithm that filters search results to provide users with the best answer to their query. RankBrain is now involved in all Google queries. RankBrain is the third most significant ranking signal.

It was a Panda refresh taking months to roll out and impact 2 to 3 percent of English queries. Its impact was difficult to assess as the update rolled out slowly.

The Quality Update (AKA the Phantom Update) changed the core of Google core ranking algorithm. The change affected the assessment of quality signals. Most impacted were pages with content quality issues, and too many ads. Hubpages suggested that Google was somehow targeting How-To or informational sites. Marketers could see the results, but there was no confirmation of the update, so they dubbed it as the Phantom Update.

The mobile-friendly Update (AKA Mobilegeddon) meant to boost mobile-friendly pages in search rankings and enhance the quality of on mobile devices. The update impacted all languages globally.

Send me a message